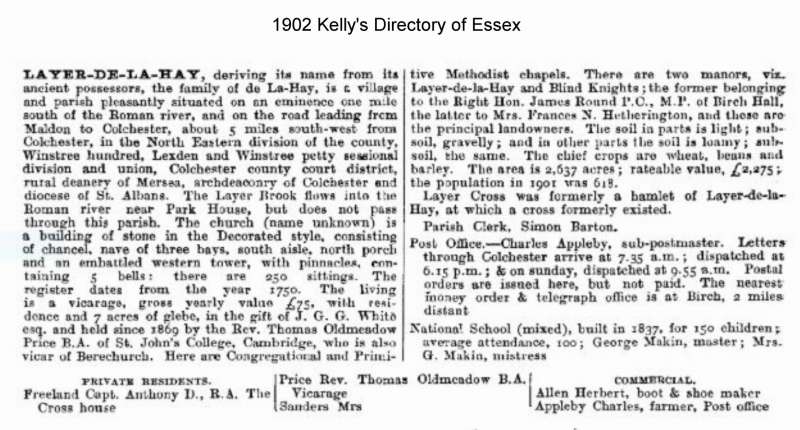 Layer-de-la-Haye, deriving its name from its ancient possessors, the family of de La-Hay, is a village and parish pleasantly situated on an eminence one mile south of the Roman river, and on the road leading from Maldon to Colchester, about 5 miles south-west from Colchester, in the North Eastern division of the county, Winstree hundred, Lexden and Winstree petty sessional division and union, Colchester county court district, rural deanery of Mersea, archdeaconry of Colchester and diocese of St. Albans. The Layer Brook flows into the Roman river near Park House, but does not pass through this parish. The church (name unknown) is a building of stone in the Decorated style, consisting of chancel, nave of three bays, south aisle, north porch and an embattled western tower, with pinnacles, containing 5 bells: there are 250 sittings. The register dates from the year 1750. The living is a vicarage, gross yearly value £75, with residence and 7 acres of glebe, in the gift of J.G.G. White esq. and held since 1869 by the Rev. Thomas Oldmeadow Price B.A. of St John's College, Cambridge, who is also vicar of Berechurch. Here are Congregational and Primitive Methodist chapels. There are two manors, viz. Layer-de-la-Haye and Blind Knights; the former belonging to the Right Hon. James Round P.C., M.P. of Birch Hall, the latter to Mrs. Frances N. Hetherington, and these are the principal landowners. The soil is loamy: subsoil, gravelly; and in other parts the soil is loamy; subsoil, the same. The chief crops are wheat, beans and barley. The area is 2,637 acres; rateable value, £2,275; the population in 1901 was 618.

Layer Cross was formerly a hamlet of Layer-de-la-Hay, at which a cross formerly existed.


Top
This image is part of the Mersea Museum Collection.